For thousands of years predating even Shakyamuni Buddha our core teacher, Yogic practices such as intentional sitting practice.  It is believed that the monastic tradition was created out of the need  deal with the rainy season, which made it hard to practice outdoors or in the forests.  In Thai Land, China, Korea, Japan, Vietnam and Tibet monastics engaged in meditation, usually spending at least six months each year in retreat.  This practice of pure awareness practice schools emerged also know by some as Yogacara.  Yogacara is refereed to as “consciousness only” grew out of Mahayana Madhyamika Buddhism in the fourth century CE.  This mind sitting or mind Yoga was the birth place of Chan, Son or Zen  meditative practices. Yogacara considers enlightenment the state of true suchness.  This non-moving mind develops free of discriminating thoughts.  This meditation and concentration is the heart of our practice and is essential in developing a heart and mind open to all.  True compassion and empathy can arises automatically when one takes up this practice seriously.  Zazeen can heal the hearts and minds of all sincere aspirants. 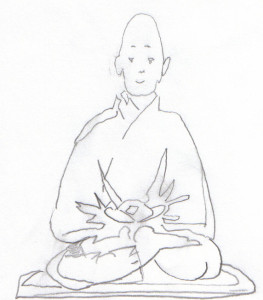