Om Mani Pad Me Hum  or OM Mani Banme Hum  (Korean)  or On Mani Hatsu Mei Un (Japanese). . .  this manta first recorded in (1050 CE  Taisho Tripitika) Shakyamuni states, “This is the most beneficial mantra. Even I made this aspiration to all the million Buddhas and subsequently received this teaching from Buddha Amitābha (repeat)The mantra means represents the purification of the siz realms and represents :generosity, Ethics, Patients, Diligence, renunciation, and Wisdom.  Also, known as to open the lotus within my heart.

“It is very good to recite the mantra Om mani padme hum, but while you are doing it, you should be thinking on its meaning, for the meaning of the six syllables is great and vast… The first, Om […] symbolizes the practitioner’s impure body, speech, and mind; it also symbolizes the pure exalted body, speech, and mind of a Buddha[…]””The path is indicated by the next four syllables. Mani, meaning jewel, symbolizes the factors of method: (the) altruistic intention to become enlightened, compassion, and love.[…]””The two syllables, padme, meaning lotus, symbolize wisdom[…]””Purity must be achieved by an indivisible unity of method and wisdom, symbolized by the final syllable hum, which indicates indivisibility[…]””Thus the six syllables, om mani padme hum, mean that in dependence on the practice of a path which is an indivisible union of method and wisdom, you can transform your impure body, speech, and mind into the pure exalted body, speech, and mind of a Buddha[…]” Thoughts to be had whilst chanting transcribed in simplification keeping essence:Being and non-beings proliferate loving compassion and indivisible intelligent equanimity; Om Mani Padme Hum.That is the natural ubiquitous pervasive force of consciousness. These frequencies are in the Sanskrit tongue, act as a harmonic sound resonance against blocking energy, or sleeping energy. Plants reflect this action as well because of the phonetic strength of vibration that is stimulated by natural pronunciation. 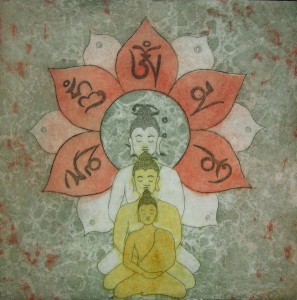 Jijang-bosal, Jijang-bo-sal  . . . (repeat) The Manta Means Jizo or Ksitigarbha is known for his vow to take responsibility for the instruction of all beings in the six realms between the death of Guatama Buddha and the rise of Maitreya, as well as his vow not to achieve Buddhahood until all hells are emptied. He is therefore often regarded as the bodhisattva of hell-beings, as well as the guardian of children and patron deity of deceased children and aborted fetuses in Japanese culture.

Namo Amitabha or Namo Amitabul or Namo Amitayas  . . . (repeat) The manta means Amitābha is known for his longevity attribute, pure perception and the deep awareness of emptiness of phenomena. According to these scriptures, Amitābha possesses infinite merits resulting from good deeds over countless past lives as a bodhisattva named Dharmakara. “Amitābha” is translatable as “Infinite Light,” hence Amitābha is also called “The Buddha of Immeasurable Life and Light”.

Tayata  Om Bekandze Bekandze  Maha Bekandze  Radza Samudgate Soha    . . . (repeat) The mantra means:  May the many sentient beings  who are sick,  quickly be freed from sickness.  And may all the sicknesses of beings  Never arise again.

Om is often regarded as being the primeval sound, and in fact the sound-symbol of reality itself. It represents the universal principle of enlightenment.

Ah, in traditional explanations, is usually said to be connected with speech (more about that in a moment) but in Sanskrit “ah” is a verb meaning “to express , signify ; to call (by name).” So it suggests evoking, or calling forth, the manifestation of enlightenment.

Hum is often thought of as representing the manifestation of enlightenment in the individual human being. This may be a complete coincidence, but hum is similar to the first person singular “aham,” which means of course “I.”

Often these syllables are associated with body, speech, and mind respectively (i.e. the whole of one’s being). So there’s a suggestion that we are saluting the qualities that Padmasambhava represents with all of our hearts (and minds, and bodies).

Vajra means thunderbolt, and represents the energy of the enlightened mind. It can also mean diamond. The implication is that the diamond/thunderbolt can cut through anything. The diamond is the indestructible object, while the thunderbolt is the unstoppable force. The vajra also stands for compassion. While it may seem odd to have such a “masculine” object representing compassion, this makes sense in esoteric Buddhism because compassion is active, and therefore aligned with this masculine symbol. (The term “masculine” does not of course imply that compassion is limited to males!)

Guru, of course, means a wise teacher. It comes from a root word, garu, which means “weighty.” So you can think of the guru as one who is a weighty teacher. Padmasambhava is so highly regarded in Tibetan Buddhism that he is often referred to as the second Buddha.

Padma means lotus, calling to mind the purity of the enlightened mind, because the lotus flower, although growing in muddy water, is completely stainless. In the same way the enlightened mind is surrounded by the greed, hatred, and delusion that is found in the world, and yet remains untouched by it. The lotus therefore represents wisdom. Again, while westerners would tend to assume that the flower represents compassion, the receptive nature of the flower gives it a “feminine” status in esoteric Buddhism, and to the lotus is aligned with the “feminine” quality of wisdom. And once again, there is no implication that wisdom is in any way limited to those who are female. The words masculine and feminine here are used in a technical sense that’s completely unrelated to biology.

And Siddhi means accomplishment or supernatural powers, suggesting the way in which those who are enlightened can act wisely, but in ways that we can’t necessarily understand. Padmasambhava is a magical figure, and in his biography there are many miracles and tussles with supernatural beings.